How It's Made - Pavel Francouz Bobblehead

What goes into a bobblehead (other than two awesome Czech players) is more than you might expect. This year, the Eagles have two commemorative bobblehead nights. The first was on November 30th as we revealed the mystery bobblehead, Martin Kaut, and the second will be Eagles Alumni Pavel Francouz, which fans can put their hands-on Wednesday, December 18th.

When fans wait in anticipation in the cold December weather for their commemorative bobblehead, they can take comfort that the planning for one of their favorite commemorative pieces began in the 90-degree June weather this past off-season.

The first discussions for the bobblehead design begin internally and with Eagles’ corporate partners in May or early June. This year, the partners were the UPS Stores of Fort Collins and Warbonnett Construction.  The process requires selection of the player, pose, jersey, jersey number, any fonts used, jersey logos and sponsor logo with the manufacturer, Alexander Global.

The decision was made to focus on two standout stars from the Eagles’ Inaugural AHL campaign. The first was Kaut, a first-round draft pick of the Colorado Avalanche. The second was Francouz, an AHL All-Star goalie during the 2018-19 season, and an Eagles Alumni that graduated along the Colorado Hockey Highway to now play for the Avalanche.

Then the real fun begins. We submit player photos showing the player’s head from a variety of angles.  All the information and the photos are then used to create a “mud” carving of the bobblehead. At this stage, the “mud” carving is either changed or approved as the look and pose of the bobblehead.  As seen in photo on the left below a change had to be made.  The updated "mud carving" is on the right. Can you see what it is? 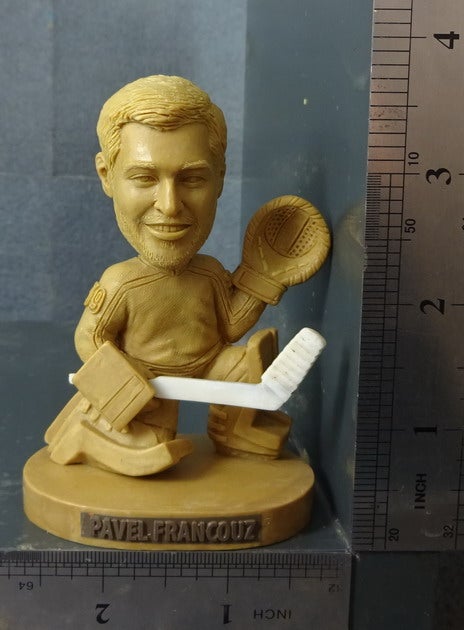 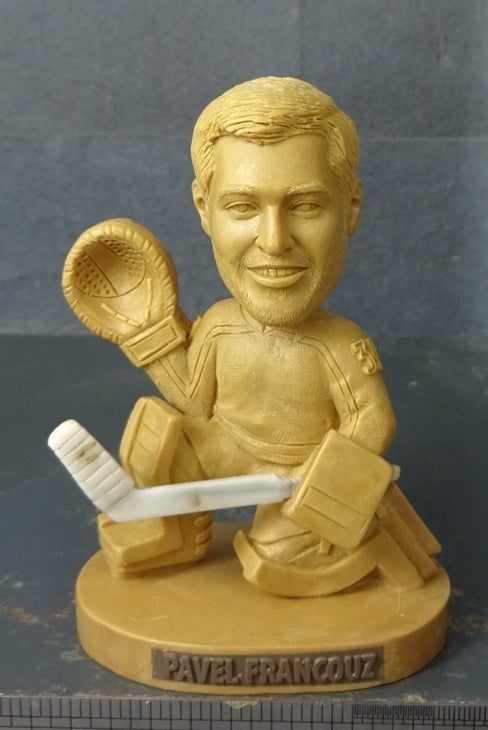 The “mud” carving is then used to make a mold from which the final bobblehead will be created. A final bobblehead is painted and logos added per the specs for a final approval.  Once the final paint is approved, the order is ready for production.  The entire process takes about five months from start to finish.

Complete or start your collection and arrive early to the Eagles game vs the Manitoba Moose on Wednesday, December 18th and be one of the first 2500 fans to receive a Pavel Francouz bobblehad. Tickets are still available at ColoradoEagles.com.