Andrew Agozzino had to be patient for his first goal. It was worth the wait.

One day after being called up from the American Hockey League for the first time in nearly three seasons, Agozzino recorded his first NHL marker and helped spur the Colorado Avalanche to a 3-0 victory over the Vegas Golden Knights on Monday at Pepsi Center.

The Kleinburg, Ontario, native also registered his first multi-point effort as he added an assist in the third period on Matt Calvert's tally to secure Colorado's lead versus the defending Western Conference champions.

"I came in with the mindset of trying to help this team, whatever aspect it was," Agozzino said. "I'm glad I did it tonight and helped this team get the win. It is a big two points for us in the playoff race. It's a special night."

Agozzino's marker gave the Avalanche a two-goal advantage at 5:47 of the second period and came after he found space in the low slot. Gabriel Landeskog fed him a perfect pass from the right corner, and he didn't miss on his ensuing shot.

The forward was making his season debut for the Avs and playing his first NHL game since Colorado's season finale versus the Anaheim Ducks on April 9, 2016. Monday's outing marked Agozzino's 11th career contest in the National League; he now has five points with one goal and four assists.

"I've been waiting a long time for that moment, and it was just special," Agozzino said of his first goal. "It's tough to put into words. A lot of emotion when I saw it go in. Just pure excitement."

The marker was a longtime coming for the 28-year-old, who went undrafted in the NHL and first joined the Avalanche on an American Hockey League contract with the Lake Erie Monsters in 2012. He earned an NHL entry-level deal the following season and has played a total of 459 career AHL games, all but 71 with the Avs organization.

Agozzino has registered 342 points (142 goals and 200 assists) in his seven seasons in the minors and has posted a team-high 50 points (22 goals and 28 assists) this year with the Colorado Eagles.

"I definitely know coming in that I'm third or fourth, one of the older forwards," he said. "At that point, I'm just here to help this team, whether it is scoring a goal or playing on the penalty kill, it doesn't really matter to me."

The forward only played nine shifts and 6:27 versus the Golden Knights on Monday, but he made them count. In addition to his two points, he finished with a plus-2 rating, one hit, one takeaway, one blocked shot and won 2-of-3 faceoff, while also skating 1:06 on the penalty kill.

"Agozzino, first game for us this year, did a really nice job for us," said head coach Jared Bednar afterward. "Smart, intelligent, 200-foot player. Made some plays, had some poise with the puck."

Agozzino became the fifth Avalanche player this season to score his first NHL goal, joining Sheldon Dries(Nov. 1 at Calgary), Vladislav Kamenev (Nov. 1 at Calgary), Ryan Graves (Jan. 4 vs. New York Rangers) and Dominic Toninato (Feb. 14 at Winnipeg). The last time the Colorado had at least five skaters tally their first goal was in 2010-11 when seven accomplished the feat. 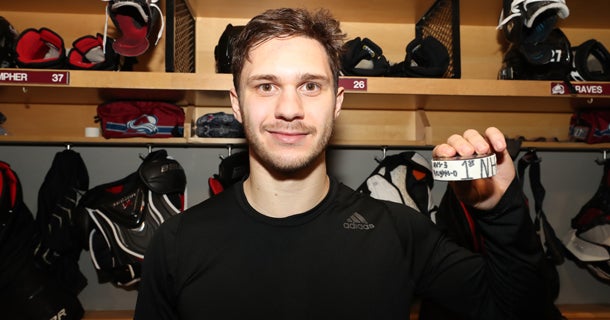 The Avalanche's second period tally was also a two-for-one milestone, as it also marked the 400th point of Landeskog's career (173 goals, 227 assists).

The Avs captain ranks 12th overall in Avalanche/Nordiques franchise history in scoring, just 14 points behind Valeri Kamensky for the 11th spot. Landeskog joined Kamensky in another accolade last Thursday when he scored his 30th goal of the season, becoming the only left wings in Avs history to accomplish the feat.

As for the milestone puck, it's safe to say that Landeskog will let Agozzino keep it. Though Agozzino's father might have another idea.

"I'm sure my dad is going to call me for it," he said. "It will probably go somewhere in my house in a nice frame. I'm sure he'll be fighting me for it."