Shane Bowers, 20, was a first-round draft pick (28th overall) of the Ottawa Senators in 2017 and was acquired by the Colorado Avalanche in a three-team trade that also involved the Nashville Predators on Nov. 5, 2017. Bowers completed his sophomore season with Boston University in 2018-19 and signed a three-year, entry-level contract with the Avs following his collegiate campaign on March 29.

Prior to the draft, the Halifax, Nova Scotia, native spent two seasons (2015-2017) with the United States Hockey League's Waterloo Blackhawks, where he compiled 84 points (37 goals and 47 assists) in 116 contests. He then continued his career by playing two years (2017-2019) at BU, finishing fourth on the team in points this past season with 21 and third in goals with 11. Bowers finished his collegiate career with a total of 53 points (28 goals and 25 assists) in 77 outings.

After signing with the Avs, the 6-foot-2, 186-pound center joined the Colorado Eagles on an amateur tryout for the end of their American Hockey League campaign. He appeared in four regular season games with the Eagles before playing in all four of the club's 2019 Calder Cup Playoff contests.

Bowers caught up with ColoradoAvalanche.com to reflect on his time in college and look at to his first full professional season.

What is your favorite thing that you have done in Denver?

"When I was here in the spring, I got to go to a couple of games in the second round of the playoffs between the Avalanche and Sharks--that was pretty cool getting to see the atmosphere."

What got you into playing hockey?

"I think just growing up in Canada, it was pretty much a given. My dad and my uncles played, and I think they probably just pushed me towards skating one day. I liked it and never looked back."

What was the highlight of your college career at Boston University?

"There are so many, I enjoyed every day there. Everyday going to the rink, it was so much fun. But probably my freshman year, we won our conference--the Hockey East Tournament--and we had to win it to make the national tournament. It was kind of just a little more special than if we were already ranked high enough to earn an at-large bit. That was fun and celebrating with my team afterwards was fun. That night is something I will never forget."

How was your experience playing with the Colorado Eagles late last season?

"It was a great experience. I only had a small sample-size since I was only there for four games in the regular season and four games in the playoffs, but it was definitely a bit of an adjustment coming from college. Being there, I learned the pro game a little bit and learned from guys who have been there before. Overall, it was a great experience." 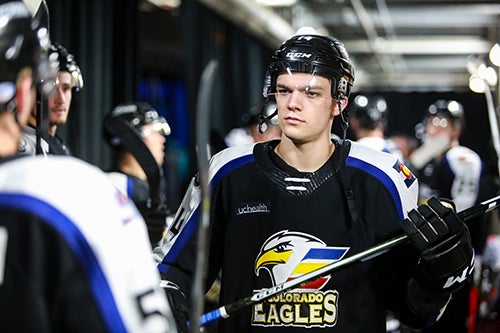 How would you describe your playing style?

"I would say that I am a complete, two-way center. I think that I am someone who can be used in all situations, whether that is in the offensive zone or the D-zone, and somebody that can play power play and penalty kill. I pride myself at being good at all those little details and being able to play in all those zones."

If you weren't playing hockey, what would you want to do as a career?

"That's tough to say, I try to never think about that. It always scares me thinking about what I would do without hockey. I guess I played lacrosse when I was younger, and I always wanted to be a policeman so maybe that. But I have never really thought about anything else."

Do you have any pregame routines?

"I have a few that stick with me, then I kind of just pick some up every year depending on if I do something different one day and it works. I always put on and tie my right skate first. All my lower gear, I put on right first, and my upper gear--like my elbow pads and gloves--I put on the left first. If I have a good game, whatever works, I tend to do the same thing."

What is the one app that you can't live without on your phone?

"I would say Snapchat."