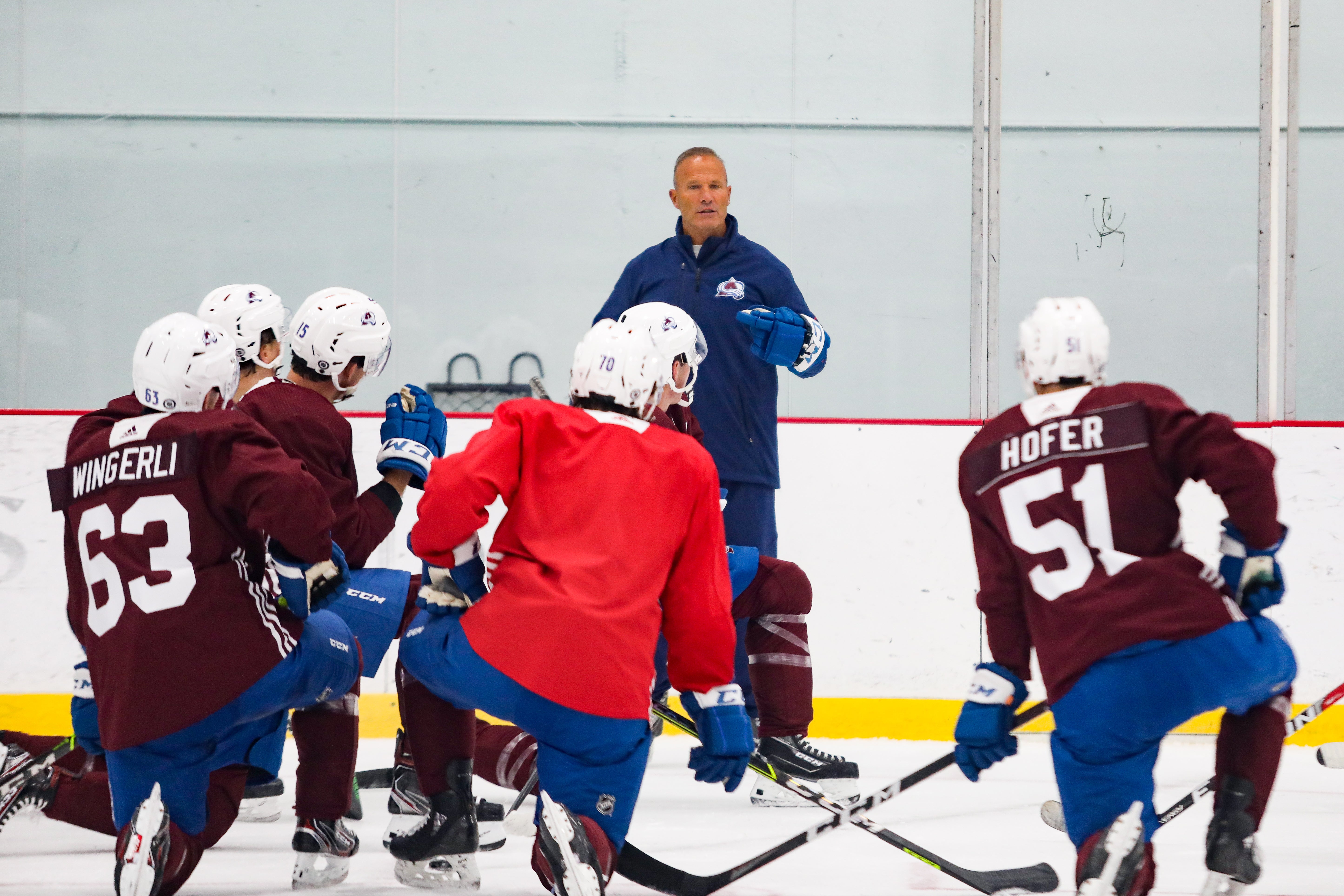 Cronin leans on strength as communicator to lead Eagles

Staring down a 34-hour drive back home to begin the offseason, Colorado Eagles head coach Greg Cronin had plenty to say.

Ten minutes after the end of a game, Cronin often is a man in a hurry and uses his words economically, as if he first needs to cool down, wind down, and assemble his thoughts. But with the 2020-21 season behind him and plenty of open road ahead as he barreled across the open plains east of Colorado toward his New England home this summer, he opened up in a conservation spanning more than an hour.

Cronin will be making that journey many more times. Three seasons into his Colorado tenure, Cronin is beginning to set down roots, especially after the parent Colorado Avalanche signed him to a three-year contract extension August 20. Cronin places a heavy emphasis on loyalty, and assistant coach Aaron Schneekloth and goaltending coach Ryan Bach also have new two-year deals going into this season.

Cronin, a 58-year-old Massachusetts native, has put together a 85-60-10-3 record through three seasons guiding the Eagles, along with sending several players on to full-time NHL work with Avalanche head coach Jared Bednar and elsewhere.

When the Avalanche hired Cronin in the summer of 2018, they had found themselves a coach who had spent 12 seasons on NHL benches with the New York Islanders and Toronto Maple Leafs as part of a career that now spans more than three decades. Cronin returned to the AHL for the first time since 2005 having added further to his extensive NCAA resume with six seasons at Northeastern University. From there he went on to three seasons in Toronto before adding four seasons on Long Island, including a stint as associate coach in 2017-18.

After the Avalanche got Cronin’s signature on the new deal, Eagles general manager Craig Billington said, “We are really excited to be able to bring back Greg and the coaching staff. The work that they have done in player development and on-ice performance has been fantastic.

“With the culture that we have created, having consistency among the coaching staff is very important, and we can now continue to instill that culture with consistency and transparency.”

After that 13-year gap between his stint with the Bridgeport Sound Tigers and his move to northern Colorado, Cronin encountered an AHL that had changed dramatically during his absence.

“It was a vastly different league back then,” Cronin recalled. “Player development was not at the forefront [like today].”

Cronin described what he learned in the interview process with the Avalanche front office. Leaving the NHL, exploring a job with a new organization, and returning to the AHL after his time away left him with plenty to investigate.

“I just was very confident in the message that was being shared with me by [Avalanche executive vice president and general manager] Joe Sakic, [assistant general manager] Chris MacFarland, and Craig Billington that they were going to really invest in the minor-league system. So when I heard that, I didn’t know what their draft picks were, what they were going to translate to. I was like, ‘Okay, I’m all in that. That’s one of my biggest strengths, I think. Player development and working with young kids.’”

But while Cronin is a head coach by job title, in many ways he comes across much more like a teacher, due in part to his extensive college experience. He credits his time as an assistant coach with the University of Maine, part of a seven-season tenure that also included parts of two campaigns as a head coach, in honing that ability to develop young talent. His mentors there included the late Shawn Walsh and Grant Standbrook.

“From the very moment I started coaching, I was blessed to be around people like Grant Standbrook, who was winning national championships [at the University of Wisconsin] with Bob Johnson when they had Chris Chelios, [Gary] Suter, Bruce Driver, and those guys, so he was incredibly ahead of his time in terms of teaching fundamentals.

“So that was kind of the genesis of my ability to actually understand player development, what works, [which] athletic principles are transferable. I played sports. Growing up, my family was always involved in football, hockey, baseball, and boxing.

“I just didn’t know how to communicate them.”

After departing Maine, Cronin moved on in 1997 to become a co-founder of the now-storied United States National Team Development Program in Ann Arbor, Mich., where he served as head coach and director of player development for its under-18 team for two seasons. His inaugural team included current AHL head coaches in J.D. Forrest (Wilkes-Barre/Scranton Penguins) and John Wroblewski (Ontario Reign), plus future NHL names in Rick DiPietro, Ron Hainsey, Jordan Leopold, John-Michael Liles, and David Tanabe.

“For me, it was like I hit the jackpot, because it was like working in a laboratory,” Cronin explained. “Before we played the first season, we had to do a lot of research. I went, and I talked to Russian coaches. I went to the [United States] Olympic facility in Colorado Springs to talk to boxing coaches, power-lifting coaches, and I just tried to get enough information to strengthen what I already knew about player development.”

Blend that time at the NCAA, USNTDP, NHL, and AHL levels, and Cronin has had plenty of opportunities to see what works — and does not work — inside a dressing room and on a bench. From the outside, he may well evoke an image as the quintessential old-school coach, but that impression would be wrong. Blunt through nature and nurture, he has learned to tailor his message through the past 30 years to young players.

Said Cronin, “The message that [my generation] got as kids growing up was very black-and-white. It wasn’t a very warm and fuzzy message. It was ‘do it.’

“I can’t use the same message my [childhood] baseball coach used today. You’ve constantly got to evolve as a coach. And my thing is, the one common thread that has to be at the forefront of every conversation, is the conviction to be honest about the message.

“If you have a vision for a player, and that vision exceeds what he’s currently doing, that [message] has to get to him. And it can’t be about yelling and screaming, it can’t be about sitting guys down all the time.

“Now it has to be like a collaboration like a marriage. I’ve found the last couple years, as soon as I say that to them, ‘This is a marriage, okay?’, they automatically begin to trust you.

“Your failure is my failure. So I’m going to give you an honest message. I’m going to be passionate about it. But we’re in this together, and we’re going to work together to maximize your potential.”