After playing 49 regular-season and four playoff games for the Colorado Eagles, it seemed like Pavel Francouz had made it. He had caught the attention of the entire Colorado Avalanche organization and proved that the attention was well deserved, and a spot on the NHL roster was his for the taking.

Francouz moved into the backup goaltending position for the Avalanche, working in tandem with Phillip Grubauer, and Eagles Country figured it had done its job. The AHL had developed another player who they would likely never see again.

But 951 days after his last Colorado Eagles game, Francouz came back. After missing the entirety of the 2020-21 NHL season recovering from hip surgery and hurting his ankle in his only start since then, in a pre-season matchup against Las Vegas, Francouz was sent to the AHL on a long-term conditioning assignment. But being sent to the AHL carried a little more nostalgia for Francouz than it does for many.

"It’s been really special for me to be back here in Loveland playing for the Eagles in front of this great crowd,” Francouz said. “It’s not the best circumstances to come back, because I’m coming back from long injuries, but it is what it is.”

Regardless of the circumstances, Francouz reveled in his short stint back in the AHL.

"It was really special for me because of all of the great memories that popped up in my head,” Francouz said. “Just seeing the coaching staff and everyone here at the rink kind of brought everything back. My first year over here in the U.S. was a really special year. My daughter was born in that time, so there were a lot of memories coming back for me.”

"I feel like the first year with the Eagles in the AHL was special for all of us here: for the coaching staff, for the fans, for everyone working here,” Francouz said. “I feel like it freshened all the memories, not only for myself but for everyone.” 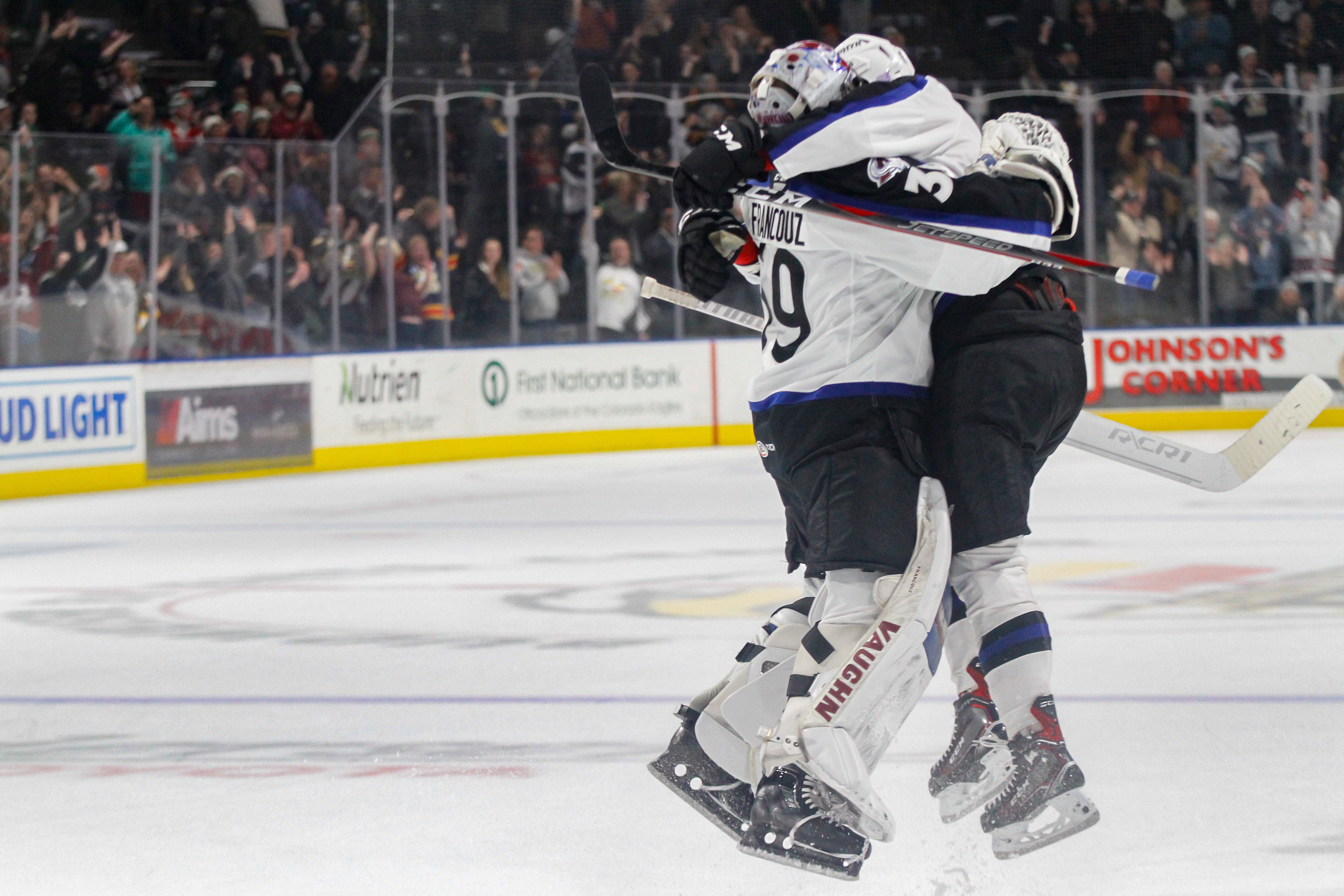 There was plenty to remember of his on-ice experience too. The 2018-19 season saw Francouz play 49 of the team’s 68 regular-season games. The Eagles went 27-17-3 with Francouz in net. Francouz ended the regular season with a .918 save percentage and just 2.68 goals-against average. Those kinds of numbers, coupled with Francouz’s calm and kind demeanor made him a fan favorite, and that was clear in his return to Loveland.

"I knew that people were excited for me to come back here and play again,” Francouz said. “It’s awesome, we could feel the support from everyone, and I feel like it helps us through the game.”

Francouz was also a fan favorite, in part, because of his clear chemistry with fellow Czech native and Avalanche first-round draft pick Martin Kaut, who made his North American debut the same year. The two were both injured while called up to the Avalanche this season and made their returns in Loveland together. 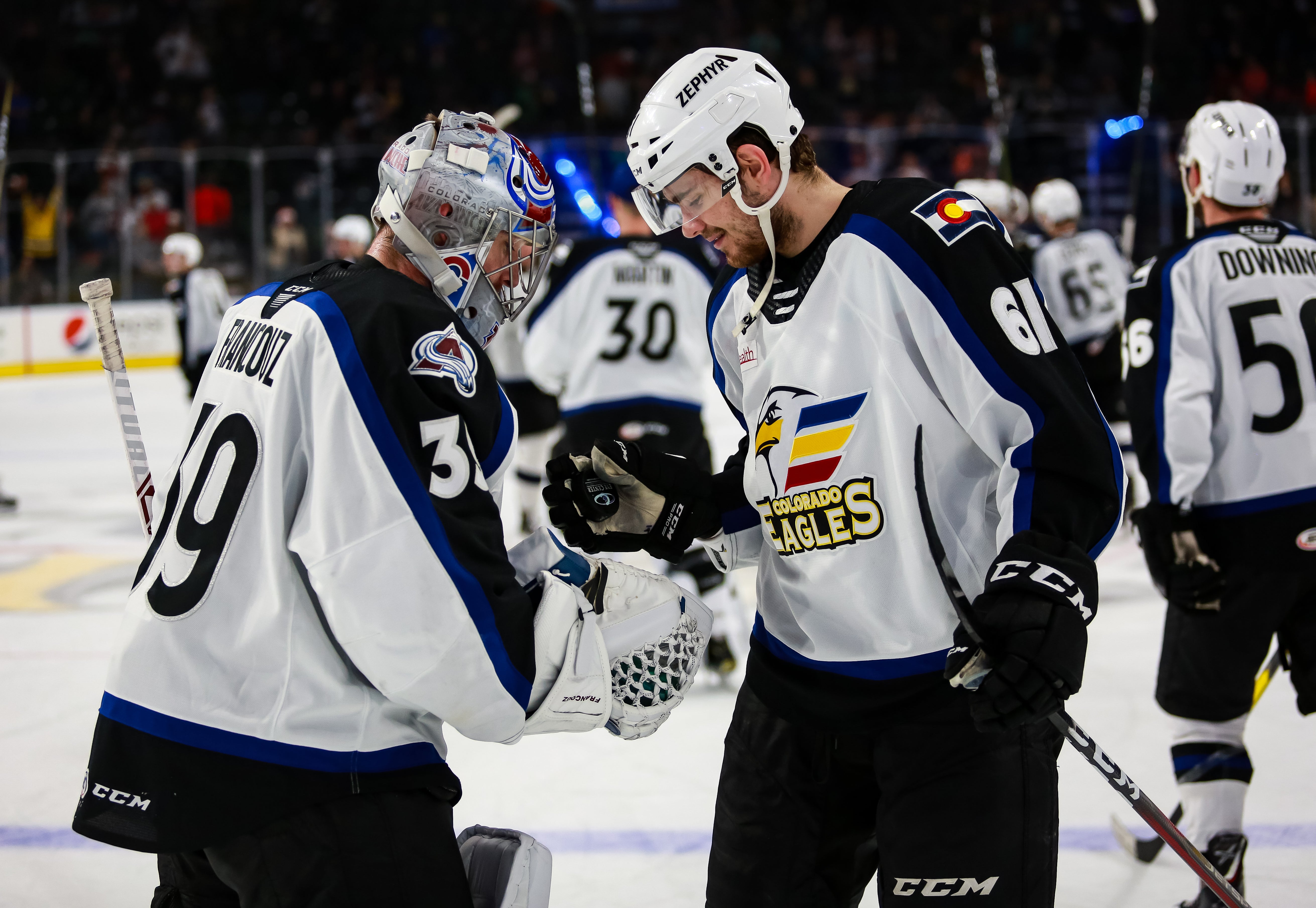 "It was kind of a funny situation that he was hurt for a little while too and we were coming back from injury together,” Francouz said, “It was a great time and obviously, it’s great to see him mature here. He’s a different player, he has a different role, he’s really doing well and I’m really proud of him and I hope he’s going to show the same things with the Avs.”

Kaut enjoyed the time the two friends were able to spend together back where things all started and remembers how helpful it has been for him to have a familiar friend with him as he’s embarked on his journey of breaking into professional hockey in North America at such a young age.

“I have to say to Frankie, thank you,” Kaut said. “He’s helped me a lot, especially in that first season. It was pretty hard for me to be without family and play in a different league here. If I’m being honest, it’s a pretty tough league for an 18-year-old kid like I was. He helped me a lot. It (was) good to be back here with him. For sure we want to be back with the Avs, but we enjoy(ed) this time together, and it’s a lot of fun to play with him." 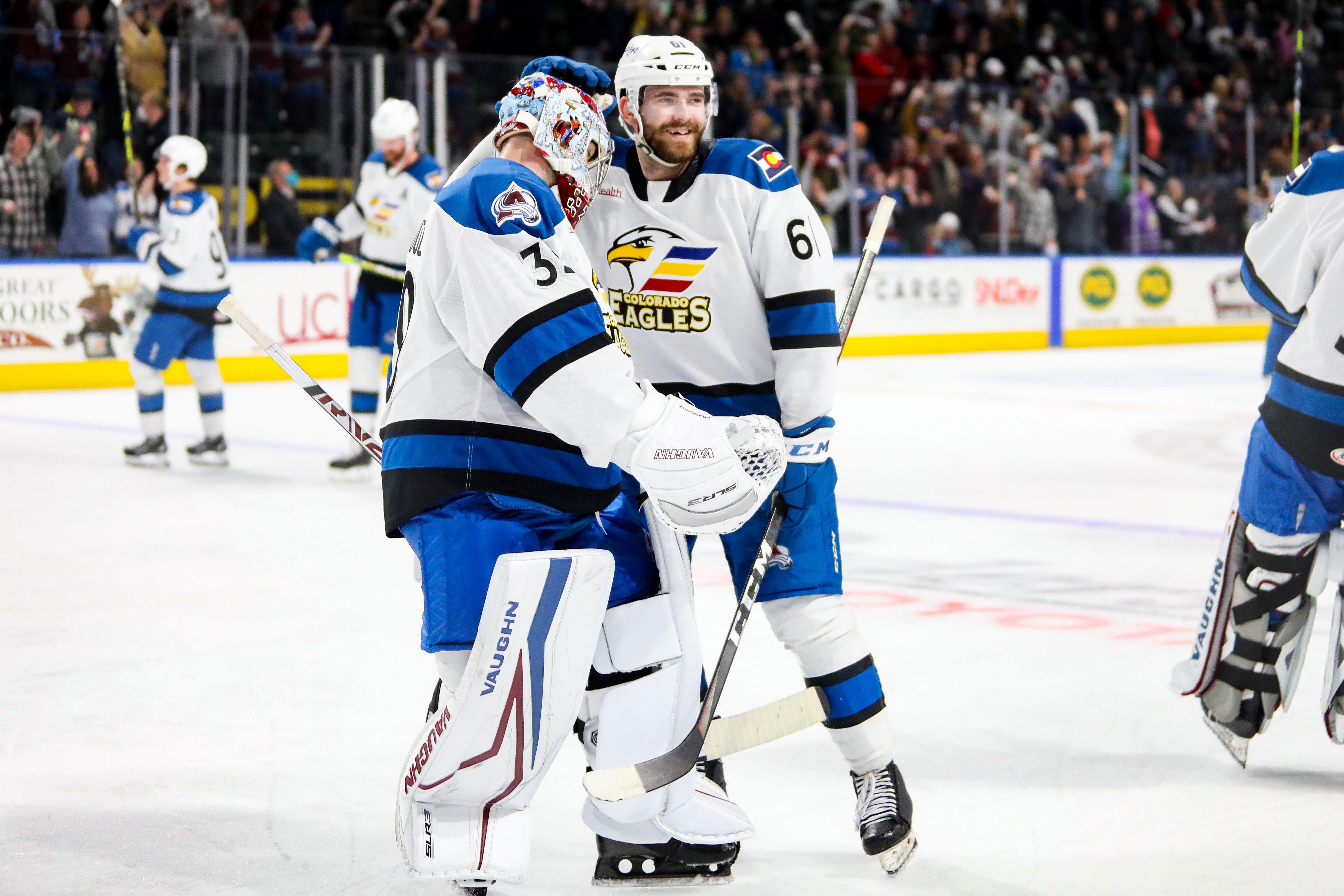 Having Francouz back was an incredible opportunity for many other young players in the locker room to learn from him and see that the time taken to develop at the AHL level can pay off.

“It’s a privilege to get him back on the ice, especially for our younger goalies,” Eagles’ goaltending coach Ryan Bach said. “They obviously look up to his career path and how he’s evolved into a National Hockey League goalie. And I think getting him back here definitely brought some new energy into the locker room and on the ice.”

Francouz happened to be in Loveland when 21-year-old Justus Annunen got his first call-up to the Colorado Avalanche.

Annunen would come in in relief of Jonas Johansson during the Avalanche game in Ottawa on December 4, making his NHL debut and getting the team through to overtime, though they eventually lost.

Annunen then got his first real look from the Avalanche coaching staff, getting his first NHL start against the Philadelphia Flyers on December 6. Annunen made 27 saves on 32 shots in a high-scoring game that ended in a 7-5 win for the Avalanche. Annunen earned his first start, first win and first point in the NHL, receiving credit for the assist on a Cale Makar breakaway goal.

"I texted him after his first start,” Francouz said. “It (was) a great week for him, and I know how special it feels when you get that first start in the NHL. I was really happy for him. He’s a great kid and he’s a great goalie, he works hard so that was totally deserved for him.”

With Francouz back in the Avalanche lineup, Annunen will step back into the starting role with the Eagles. Now he does so with some NHL experience under his belt and a clear role model to follow.

"(Francouz is) a great guy and a great goalie,” Annunen said. “(That) was good for me … it was nice to see how he works in practice, … I just hope he does well because I really like the guy. It’s good for him … he’s healthy now and gets to play.” 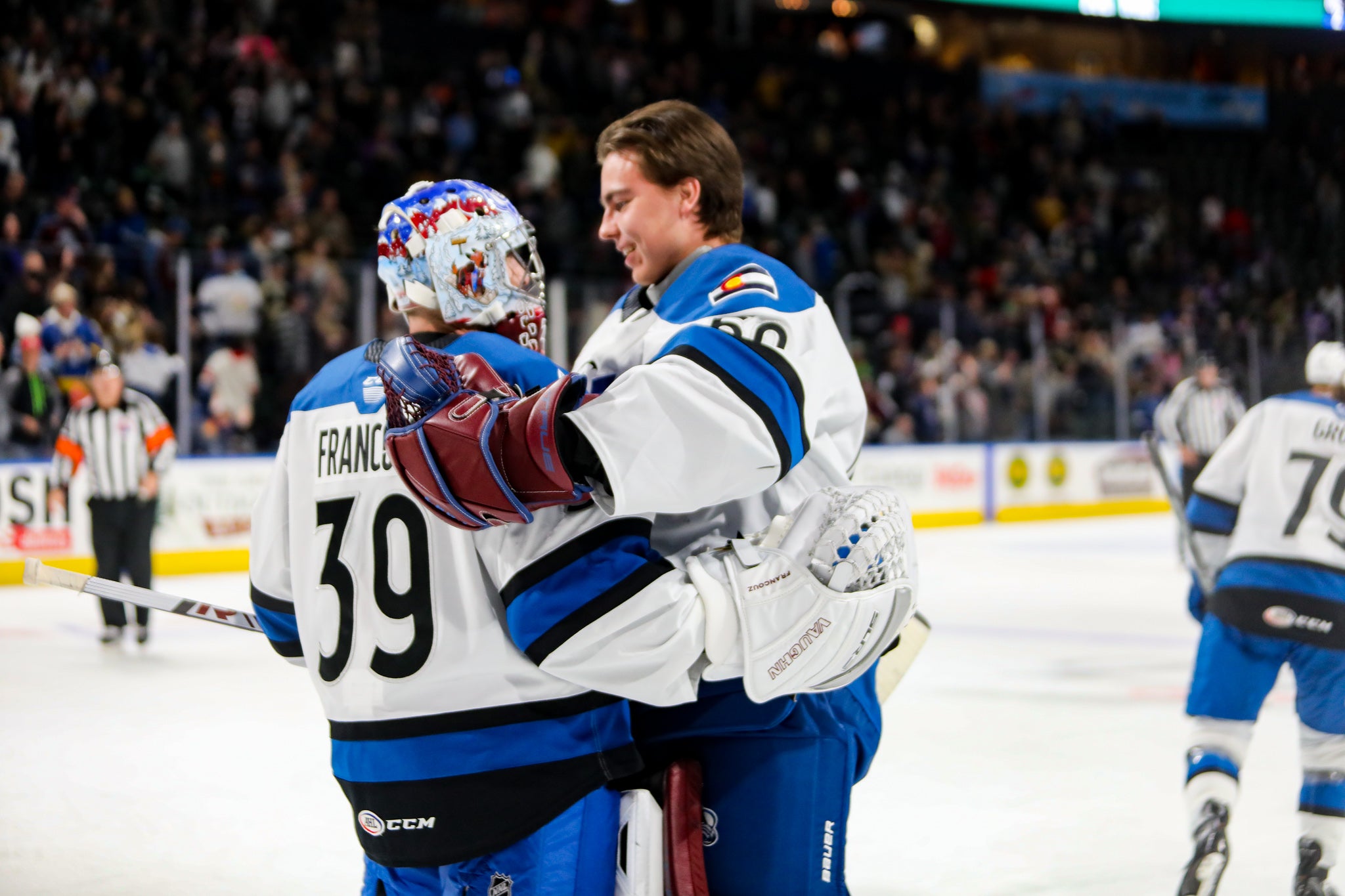 Francouz’s kindness and support for his teammates is truly what sets him apart for so many who know him.

"He’s professional on and off the ice,” Bach said. “(He’s) calming in a sense that when he is on the ice, I think that resonates through to his teammates. Just how poised and calm he is, but he is also a leader. There is confidence and comfort in his game every time he’s on the ice.”

Francouz’s presence on the ice is clearly felt. He’s always been steady, calm and reliable. But that relationship goes beyond the game. At 31 years old, Francouz has always had the benevolent benefit of age. He feels almost fatherly to not just Kaut, but all of the young players he encounters.

"It’s really funny because if you look at my age and the age of anyone else on the team, I’m a lot older than everyone else,” Francouz said. “But that kind of makes me feel younger again, so yeah, I could be the father of Kauter or anyone else but … it’s just funny.”

After a four-game injury stint with the Eagles, Francouz has officially made his return to the Colorado Avalanche, this time backing up Darcy Kuemper. Francouz posted one loss and three wins in his AHL return, recording a 1.52 goals-against average, a 0.945 save percentage and one 27-save shutout win.

"He’s put in a lot of time and work,” Bach said. “He’s got the confidence in his game, and he feels good, so he’ll make sure that he’s ready to go when called upon.”

It’s been a long journey back from Francouz’s last full NHL game on August 30, 2020. 460 days between then and his AHL re-debut, for those counting. But it seems as though the conditioning stint has done its job. 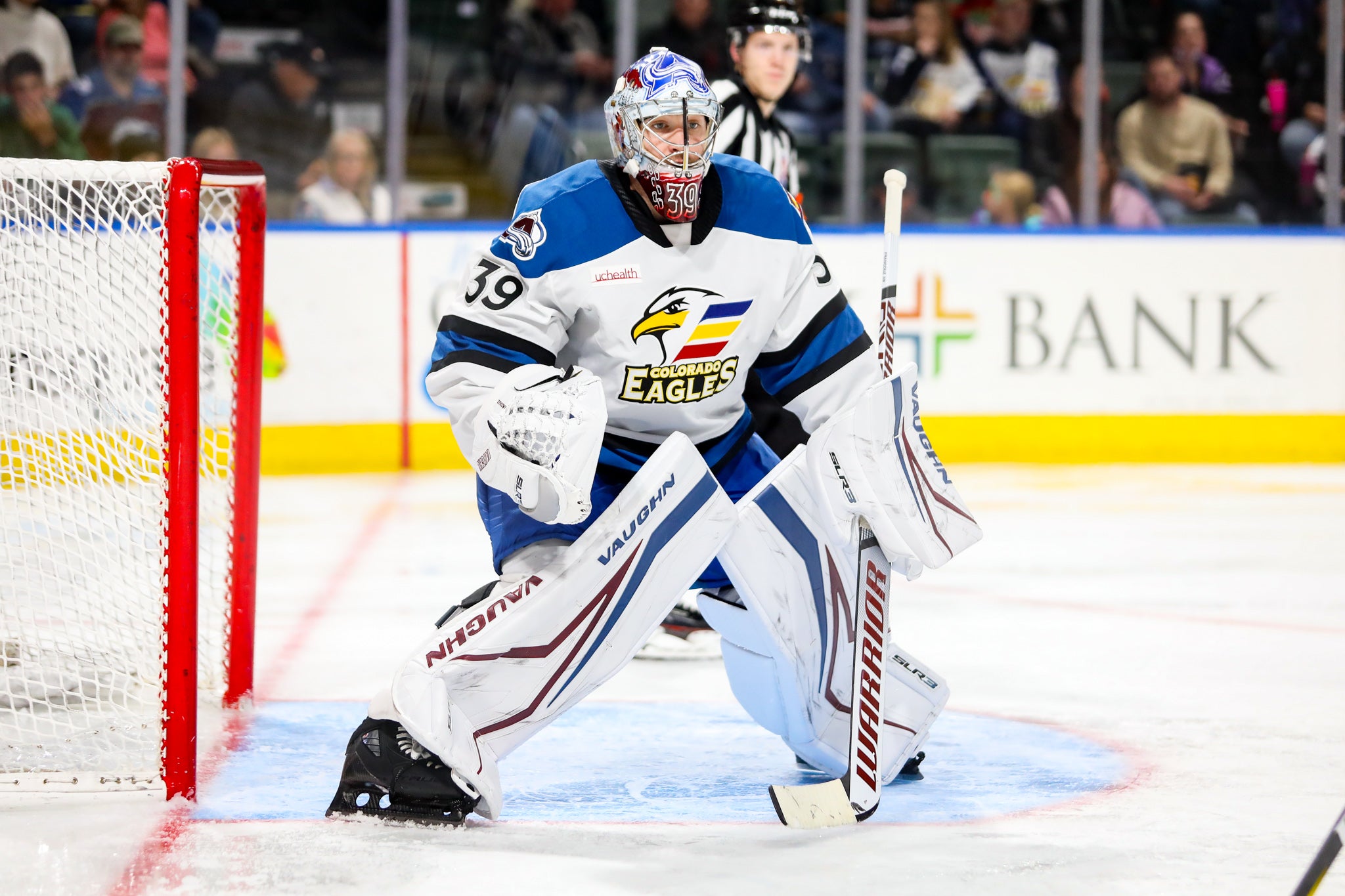 “It’s really tough to come back from injury,” Francouz said. “I didn’t play hockey for more than a year. It’s always a tough thing to do. But I’m overall feeling well, and I’m really excited about the game. I missed everything for a long time, so I feel like the excitement and the happiness gets me over the hump, and I hope I’ll be back in a normal mode soon. I (feel) great and kind of humbled that I can play the game again.”

And as for playing in Eagles Country again, “I had chills the whole time,” Francouz said.