After getting a taste of the NHL with the Colorado Avalanche in the 2016-17 season, forward A.J. Greer was excited and ready to work for a roster spot for the 2017-18 season.

"It was amazing," Greer said during training camp about his five NHL games the previous campaign. "I loved my time here, and I was so grateful to get the opportunity to showcase my abilities and make my dream come true in the NHL. I played with some great players like Nathan MacKinnon... I was really happy to get the opportunity. 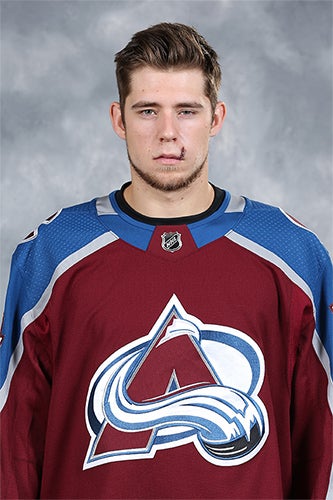 Unfortunately, the left wing missed the end of the 2017-18 preseason under concussion protocol, pausing his efforts to once again join the NHL squad. Even with the injury, Greer and the Avalanche stayed confident in his ability to help the team.

"I think I showed them a little bit of what I could do last year, and it is a matter of bringing that energy and bringing that game again toward this year," Greer said at the beginning of his first NHL stint this campaign. "Staying positive and doing the right things."

"He's got to be physical. He's got to play in straight lines and his details have to be tight, and I think he has the ability to do that," Avs head coach Jared Bednar said after Greer's first practice with the squad.

The left wing quickly returned to NHL action, playing his first NHL game of the season against the Dallas Stars on Oct. 2, two days after being brought up.

Another opportunity for the young forward came shortly after. The Joliette, Quebec, native remained with the Avalanche until Nov. 14, allowing him to travel to Sweden with Colorado for two games against the Ottawa Senators. Although he didn't play, it was a memory he won't soon forget.

"Amazing opportunity," said Greer of the 2017 SAP NHL Global Series. "Something I'll never forget in my whole life. It was my first time overseas. Being out there, the NHL does such a great job putting the events together and having us do all these trips. It was a great time out there. I'll cherish it forever."

Greer, selected 39th overall in the second round of the 2015 NHL Draft, also played 35 games for the San Antonio Rampage of the American Hockey League, scoring eight goals and adding five assists. However, he believes there is more to be seen from his offensive game as he hopes to settle into the NHL over the next couple years.

"I think my [first] stint with the Avs I didn't showcase my offensive abilities enough," Greer said after being recalled for a second time on Jan. 1. "I didn't have the confidence that I wanted to have. So, for me it's just to have that confidence with the puck, play my game, don't be nervous and have fun out there."

Greer played 17 games with the Avalanche in 2017-18 and had three assists, a plus-two rating and 29 penalty minutes. Look for Greer to expand his game at the NHL level next season, with increased offensive certainty and awareness as he adjusts to the pace and style of the league.