Logan O'Connor was just like other college hockey players in July 2018, preparing for his senior year at the University of Denver. He was coming off another strong year for the Pioneers and was named team captain of the squad for his senior season.

The now 23-year-old had helped DU capture the NCAA championship as a sophomore in the 2016-17 campaign, playing in 44 games while recording 18 points (seven goals, 11 assists). He dressed in all 41 games as a junior in the 2017-18 season, registering 21 points (seven goals, 14 assists) while leading the Pioneers with two short-handed tallies.

After a strong showing at last summer's Colorado Avalanche development camp as an invite, he earned his first NHL contract with the club on July 23, 2018. While it was hard to leave his college team, the opportunity to join the Avalanche organization was simply too good to pass up.

"That was my whole mindset going into (development) camp, playing the best I could play, and hopefully let that opportunity present itself," O'Connor said at the time. "Fortunately, I had a good camp and the opportunity was there. I went there and did what I had to do. I'm happy with how it all went. When I was presented with a chance to sign with the Avalanche, it was hard to turn down." 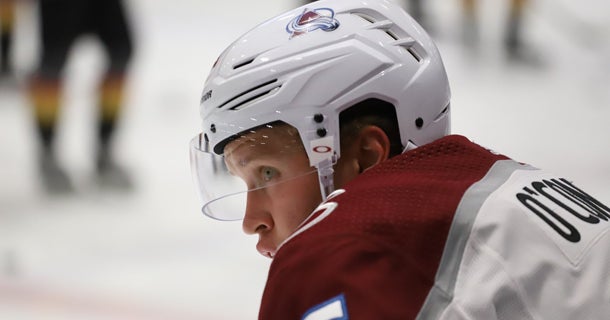 "It was definitely the hardest decision in my life," he told ColoradoAvalanche.com on the opportunity. "Having that dream right in front of you shows how unbelievable and special DU was to me and everyone that throws on the sweater there."

He began the 2018-19 campaign with the Colorado Eagles of the American Hockey League and was third on the squad in scoring with 16 points (nine goals, seven assists) after 30 contests at the time of his first NHL call-up on Dec. 30. He was also tied for the AHL lead with three short-handed markers.

"O'Connor is a guy we watched right here in our own backyard and really liked," Avs head coach Jared Bednar said of the rookie. "He came into development camp and had a real good showing with the rest of our prospects, and we made the decision to sign him. Good for him for making the best of his opportunity at this point, and now he goes up the road to Loveland and [he's done] real well."

The 6-foot, 175-pound forward made his debut in the league on New Year's Eve with the Avalanche at Pepsi Center against the Los Angeles Kings. He saw time on an even-strength line with Gabriel Bourque and Sheldon Dries and also played on the penalty kill.

"It was awesome--I mean, it was a good feeling to get there in my first, but obviously a bitter feeling having the outcome that we had," the winger said after his first NHL game on Dec. 31, a tough overtime loss for the Avs versus the Kings. "I thought we worked hard the whole game and had a good comeback there, but unfortunately we couldn't get the job done at the end, so we just have to build on that."

The right-wing spent five games with the Avalanche from Dec. 31 through Jan. 9 before heading back to the AHL to finish out the year. He skated at least 10 shifts in four of the five NHL games he played in, and he also recorded four hits and saw 2:36 on the penalty kill during his five games with the club.

In 64 total outings with the Eagles last season, he recorded 42 points (19 goals, 23 assists). He finished tied for second on the team in goals and third overall points. Led by his five short-handed scores, the squad tied for second in the league with 16 tallies while on the man disadvantage.

O'Connor got a small taste of what the NHL is all about last season, and he will look to continue his development and make a bigger impact with the Avalanche in 2019-20.