Team USA is once again golden at the IIHF World Junior Championship.

The United States shutout Canada 2-0 in the 2021 Gold Medal Game on Tuesday night at Rogers Place in Edmonton, Alberta, to win its fifth championship at the under-20 tournament.

For the U.S., it was the country's fifth medal in the last six years at the World Juniors and the team now improves to 4-1 all-time against Canada in gold medal contests. USA Hockey last won gold in 2017 following Denver native Troy Terry's heroics in the shootout against Canada. USA also won in 2004, 2010 and 2013.

Colorado Avalanche prospect Drew Helleson, selected No. 47 overall in the second round of the 2019 draft, created the first goal of the outing for Team USA. Helleson's shot from the right point was redirected into the net by Alex Turcotte with 6:35 remaining in the opening period. The assist marked Helleson's fourth point (two goals, two assists) in seven games at the 2021 World Juniors.

Helleson, who played on the Americans' top defensive pairing with Jake Sanderson and had won a bronze medal at the 2018 IIHF U18 World Championship, finished with a plus-2 rating in 19:37 of ice time on Tuesday. He was also out on the ice at the end of the game to help defend against a late surge by the Canadians. 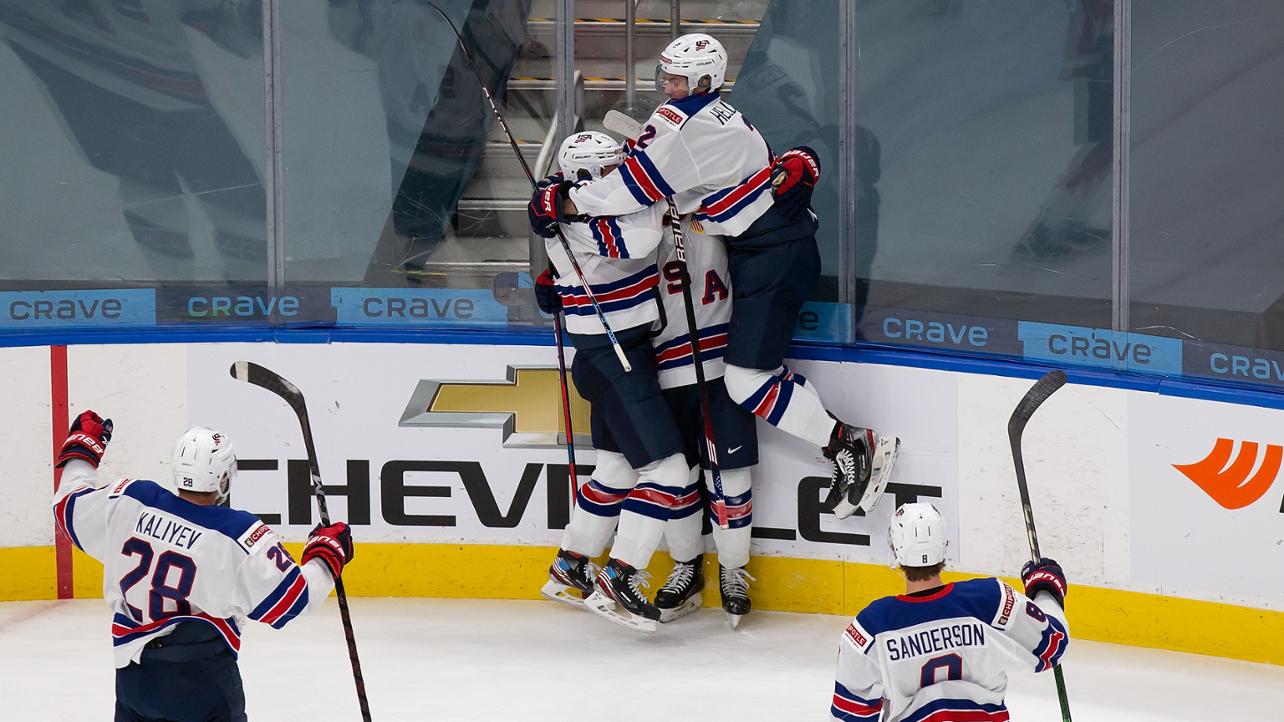 Team USA extended its lead to 2-0 just 32 seconds into the second period as Trevor Zegras buried a puck near the post after it originally went off the side of the net. Goaltender Spencer Knight did the rest for the Americans as he stopped all 34 shots he faced, including 15 in the third period, to give the U.S. its first shutout in a medal game in the World Juniors history.

The Avalanche had three prospects on Team Canada in forward Alex Newhook and defensemen Bowen Byram and Justin Barron, and each had strong showings in the tournament for the host country. Canada never trailed in the first six contests and didn't give up a 5-on-5 goal until the championship contest.

Byram, who was a co-captain with Dylan Cozens and won gold with the squad in 2019, wore the 'C' in the final for Canada and had four shots on goal while playing a game-high 25:54. He was later named the player of the game for the squad.

Drafted No. 4 overall by the Avs in 2019, Byram ended with five points (one goal, four assists) in seven games, finished second in the tournament with a plus-13 rating and averaged 22:59 of ice time per outing. He was named one of the three best players for Team Canada at this year's World Juniors and also earned a place on the all-tournament team.

Newhook, the 16th overall pick in 2019 that played 16:00 in the championship contest, finished with three goals and three assists in six games and ended with a plus-8 rating in his first-ever World Juniors. For Newhook, the silver is his first medal of any kind in international play.

Barron also played in his first World Junior Championship and had 12:10 of ice time in the gold medal game. Colorado's first-round pick at No. 25 overall in the 2020 draft, Barron had two assists and a plus-5 rating in seven contests at the tournament. It was the first time that the Halifax, Nova Scotia, native represented his country at an IIHF-sanctioned event.

Canada will once again be the host nation next season, with the tournament being played in both Edmonton and Red Deer, Alberta--the original sites for the 2021 event before it was switched to just Edmonton due to safety concerns surrounding the coronavirus. No fans were able to attend any of the competition this year.

In the bronze medal game earlier in the day, Team Finland held off Russia to win 4-1. The United States defeated the Finns 4-3 in the semifinals on Monday after scoring the go-ahead goal in the final two minutes of play.