Managing your expectations is important, but if you’re a young kid about to fulfill a lifelong dream it can be hard to stay out of your head.

For Conor Timmins, those skills are something he’s become accustomed to developing over the past few years, and his experience at the 2017 NHL Entry Draft was no different. During his draft year, Timmins was a solid contributor for his junior team, the Sault Ste. Marie Greyhounds, and that put him on the bubble of being a first or second-round pick.

“My agent told me I could go anywhere late in the first round or early in the second,” Timmins said. “I was a little nervous going into it but it didn’t really matter where I went. My family was a great support system and they just told me to enjoy the day.”

Timmins wasn’t selected in the first round and dealing with that was a little tough to swallow. With all your friends and family there with you, it can feel like an eternity waiting to hear a team call your name. Fortunately, Timmins didn’t have to deal with that disappointment for long on day two as the Colorado Avalanche selected him with the first pick of the second round, 32 overall. 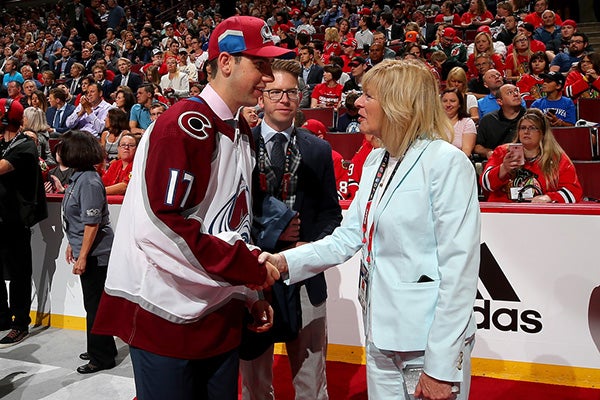 “It was the first pick that day so I had just sat down about ten minutes before that, it kind of caught me off guard,” Timmins said. “I wasn’t expecting to go that early. It was nice to hear my name called and I was excited.”

For Timmins, being at the draft was a chance for him to recognize a dream and share it with the people who helped him get there. When you’re trying to fulfill your dreams, you can’t do it alone, and the support of your loved ones can’t be understated. Timmins was able to share that moment with a lot of people who had helped get him to that point.

“I was lucky enough to have about twenty family members there and six of my close buddies,” Timmins said. “They made the trip down to Chicago, to be able to share that with them in a city like that, it really made the weekend special and it’s something I’ll never forget.”

While Timmins was surprised by being selected so quickly on the second day, the defenseman believes his familiarity with Colorado’s head scout Alan Hepple played a role in the Avalanche selecting him. When you’re trying to score a job it’s typically about who you know that can help get you in the door, and the NHL is no different.

“I knew Al Hepple pretty well,” Timmins said.  “I had a pretty good relationship with him. I went to lunch with him before the draft and we had some good talks. I Just felt like Colorado was a good fit for me, I fit well in their system, I think they thought the same thing and it turned out to be a good match.”

The quick turnaround on day two ended the nerves for the Ontario native, and while walking down towards the stage Timmins was finally able to take in the moment. 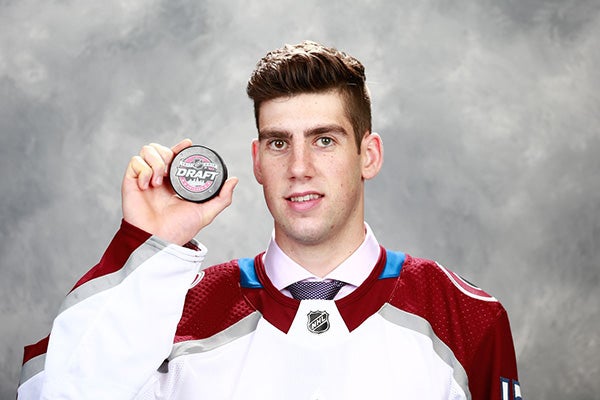 “I know a lot of guys are worried about falling over but I was just soaking it all in,” Timmins said. “Meeting the staff at the Avs table, meeting Joe (Sakic) was pretty cool. You just kinda forget about everything else going on in the moment and take it all in.”

For all picks in the draft, hearing your voice over the speakers is a relief, but it also means the real work has just begun. Though it’s not uncommon for players to slide up and down expected spots on the draft board. In retrospect, it doesn’t matter, and Timmins believes it’s simply taking advantage of being drafted that matters.

“You just want to enjoy the whole experience,” Timmins said. “There are some stressful moments with interviews and being young guys you can get in your own head with that, but at the end of the day it doesn’t matter where you go it’s what you do with the opportunity.”