Playing for the Colorado Eagles is much more than just playing for a hockey team. It’s about playing for a community. Since the team’s inception in 2003, the Northern Colorado community has rallied behind it’s Eagles every fall. This support from the community has made it’s way into the hearts of Eagles players and their families, so much so that several have made the choice to call Northern Colorado their home. One of those player is former Eagles defenseman, Jay Birnie. Jay played for the Eagles for four seasons, bringing home a President’s Cup his first year with the team in 2006-07. 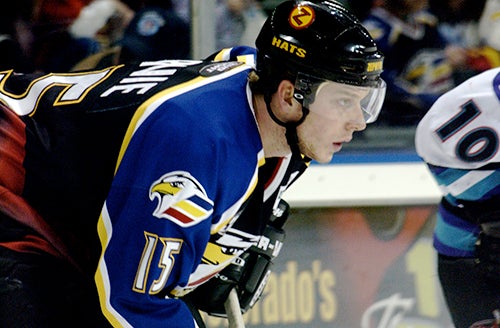 Since his playing days with the Eagles Jay has settled into a new role with a new band of brothers, a firefighter on the Wellington Fire Department. “I’m a full time firefighter with the Wellington crew now” said Birnie, “I actually started out in the volunteer firefighter program in Windsor, and then after I finished that Wellington offered me a job.”

Being a firefighter in Colorado is not an easy task, especially this summer with wild fires rolling across the state. Northern Colorado has seen it’s share of wild fires over the years, but few fires have matched what we’ve seen this summer with the Cameron Peak Fire. “With the Cameron Peak Fire being as large as it is, it’s not just for one department, all the local departments get involved” said Birnie, “Each of these departments will have their own wild land team. Every team will then start doing 14 day rotations. So you’re going up there, camping at a campsite, to fight this thing for 14 days straight.”

A daunting task, but one that these brave men and women take on to help secure home and preserve the beauty of Northern Colorado. So Jay, what’s it like getting up there and fighting this massive fire?

With an understatement like that, most would be able to tell that this man has played some hockey. We pushed a little harder and asked Jay to elaborate on this experience of his.

“It’s not for the faint of heart that’s for sure, there’s a lot of hard work that goes into it. There’s been a couple 16-17 hour days where you’re using hand tools and you’re digging around structures all day. But it’s all necessary to make sure those structures are safe and hopefully prevent future fire growth.”

We want to thank Jay and all the fire departments around Colorado that continue to fight these fires. For the full interview with Jay Bernie, click the link below.